All posts in Pet Transportation 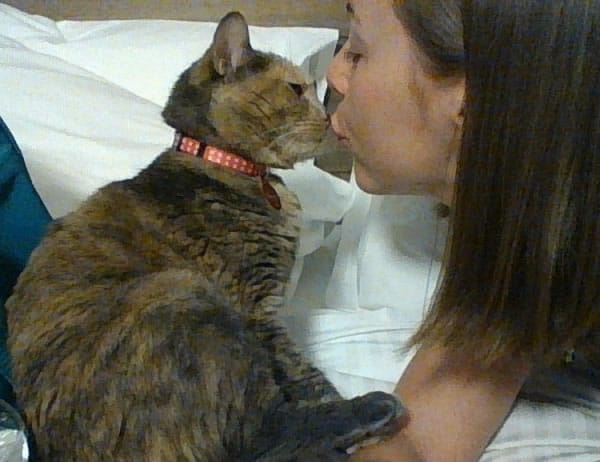 Although The Pet Gal is known for our high-quality pet sitting and dog walking, we also offer a variety of unique and personalized services – including pet taxi, concierge services, and more.

In early May, The Pet Gal was contacted by a client who’d recently relocated to Australia and needed help getting her cat prepared to travel from Austin to Los Angeles and then on to Melbourne, Australia.

Since the client had already moved, the cat’s international journey was being coordinated entirely from overseas. The Pet Gal was able to step in and provide a customized selection of services to help the client be reunited with her cat, including:

Pet taxis to and from vet appointments
Concierge services to acquire international travel documentation and pick up online orders of pet supplies
In-home boarding
Pet sitting
Unique pet taxi during which a Pet Gal flew with the cat to Los Angeles!

By getting to know the client, her pet, and their specific needs, The Pet Gal assisted in everything required to get her fur baby safely from Austin to her new home in Australia. 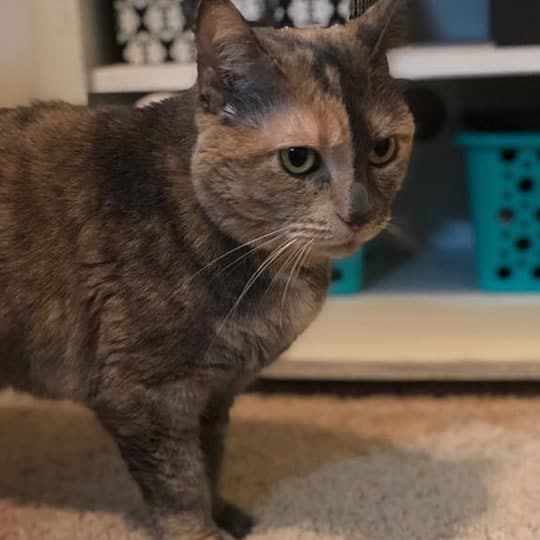 A four-year-old tortoiseshell female, Dante the cat was sweet-natured but timid. Her owner described a pattern of behavioral problems and distrust when she was first adopted, signaling that her life prior to finding her forever home was not a good one. Luckily, she found an amazing family, learned to trust again, and formed a wonderful attachment to her owner – eventually even seeking out attention and affection.

Despite her comfort with her new owner, Dante still showed signs of anxiety – including panic attacks –when traveling. The client described Dante’s demeanor during car travel as “content in her crate but distressed by loud noises and movement.” She was concerned that this anxiety would only worsen during airplane travel.

Dante’s emotional and physical health was our number one priority, so throughout the entire process, we relied on our top cat behavior specialists to ensure she was as comfortable and prepared she could be before and during travel. 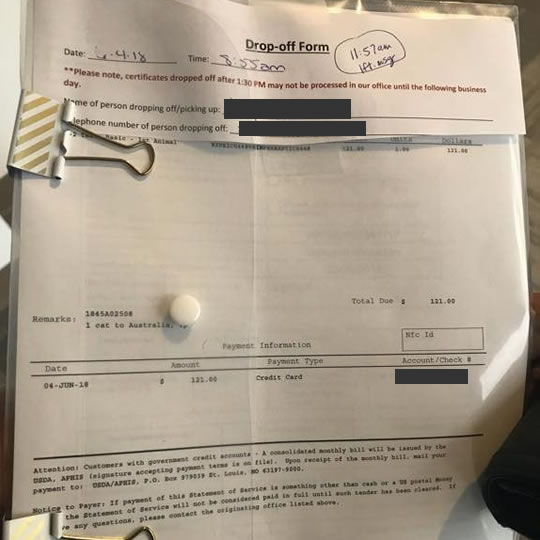 PREPARATION FOR THE TRIP

Moving an animal internationally is a highly involved process. Not only is there a mountain of paperwork to handle prior to departure, but the pet must also be emotionally and physically prepared to handle car rides, noisy airports, and long hours in a crate or carrier. Our goal was to do everything possible to offer peace of mind to the client and loving support to Dante while navigating this complicated journey. 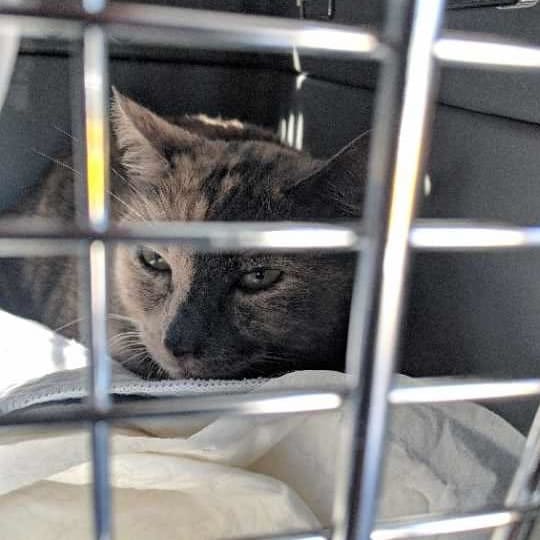 When The Pet Gal was first contacted by the client, her main concern was helping Dante acclimate to the strange sounds and new environments of travel. We got to know the client’s needs and concerns via a Skype call and met in person with Dante’s Austin-based caretaker before scheduling a few preliminary pet sitting appointments and pet taxi rides.

During the initial pet sitting appointments, Pet Gals Debbie and Siobhan took care of Dante and helped her get used to new people. Throughout the car rides, our sitters helped the kitty adjust to her new travel crate by driving her around in a car and carefully monitoring her behavior to ensure she was calm and happy. Each ride, they would take different routes to help Dante get used to bumps, noises, and turns.

Pet Gal Tabitha, our resident cat expert, suggested a few additional methods to acclimate Dante – including playing a soundtrack of airplane noises during the car rides. Throughout this process, we communicated with the client extensively to keep her updated on Dante’s progress.

After the success of the first few rides, the client asked if we could provide additional pet taxi services to vet appointments. International transport of live animals requires verification that the pet is healthy, up to date on all vaccination requirements, and parasite-free. Pet Gals Joy and Debbie assisted in taking Dante to the vet multiple times throughout the month and helped the client get documentation of Dante’s good health. 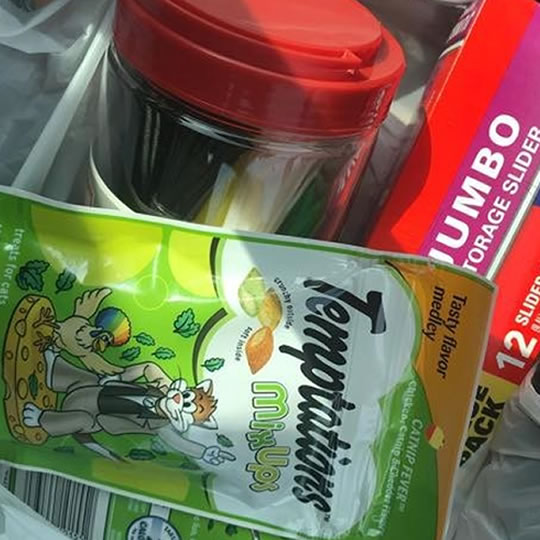 Coordinating a live animal’s travel from across the world is no easy feat, but our client was able to be hands-on in the process by utilizing The Pet Gal as a local, in-person resource for a variety of important errands. From picking up online orders for pet necessities at HEB and Petsmart to dropping off essential paperwork for Dante’s travel at the USDA, The Pet Gal was able to offer unparalleled personalized services that were essential to making Dante’s trip possible. 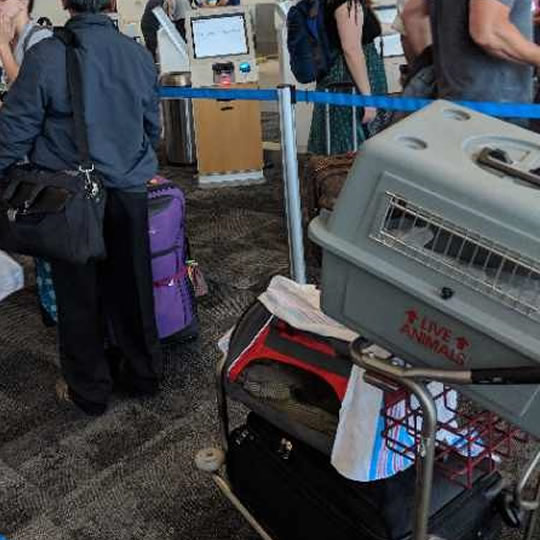 Not long before Dante’s scheduled flight, the client learned that Dante’s caretaker was moving. She was concerned that the hectic environment of a home in transition would exacerbate her kitty’s anxiety, so she contacted us for a pet taxi service from the caretaker’s home to a pet-friendly hotel.

Pet Gal Tabitha stepped in and offered to board Dante in her home instead. Not only would this put less stress on Dante, but Tabitha could offer more one on one time to further prepare her for travel. As the founder of Pawsitive Karma Rescue, Tabitha was the perfect person to board Dante. Though she was fostering kittens at the time, her vast experience in “quarantining” cats helped ensure there was no cross contamination of illness or viruses that would affect Dante’s approval to travel internationally.

Pet Gal Tabitha even set up her pet cam in Dante’s room so the client could see and communicate with her! 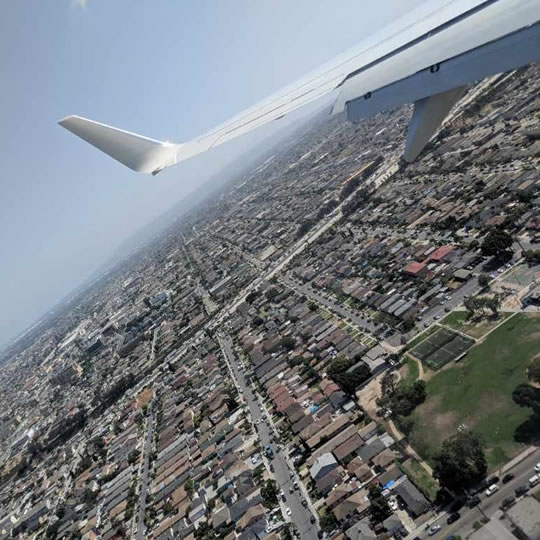 By the end of May, The Pet Gal family had been an essential part of Dante’s travel preparation. So much so, our client asked if any of our pet sitters would be able to provide a pet taxi service to fly with Dante from Austin to Los Angeles! Once in LA, Dante would need to be safely transferred from the plane to Qantas Airlines, where she would be flown to Melbourne, Australia. By having a Pet Gal along for the ride, Dante would have support and the client would be able to be kept in the loop every step of the way.

We found a Pet Gal willing to accompany Dante on the trip and worked closely with the client to book the right flight that would work best for Dante’s transport. Prior to the trip, our Pet Gal was scheduled for a few pet sitting and pet taxi visits to get to know Dante and build a relationship with her.

Our Pet Gal did her due diligence in communicating with the airline and rental car company to ensure that all the details were ironed out. In doing so, she learned from the airline that even though the client had booked a live animal reservation for the cargo hold, the high temperatures of Austin meant no live animals would be placed in cargo for safety reasons. Our team acted swiftly and efficiently in solving this last-minute crisis. We were able to coordinate Dante as a carry-on instead and as a result, Dante’s crate needed upgrading. Pet Gal Tabitha offered the client use of her personal, airline-approved, soft carrier.

The flight departed on a Tuesday in early June. Our Pet Gal coordinated Dante’s travel from Tabitha’s home to the airport and kept Dante calm through security and during the flight – all while keeping the client up to date via messages and photos!

Once safely in LA, our Pet Gal and Dante hopped in a rental car and headed to Qantas airlines. Once our Pet Gal ensured all the necessary paperwork was in line, Qantas took over transporting Dante from LAX to Melbourne. 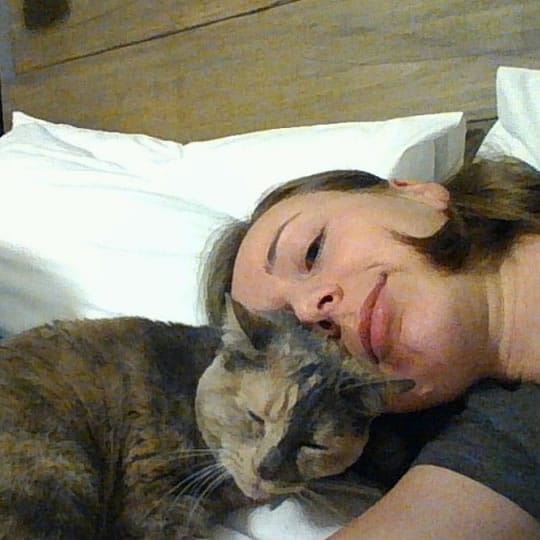 After Dante landed in Australia she was moved to a quarantine facility where her health was monitored closely for 10 days. According to the Australian government website, “The 10-day quarantine period, in addition to testing conducted offshore prior to import, allows biosecurity and veterinary officers sufficient time to assess that the animals are healthy and are not carrying diseases or parasites.”

A couple of weeks after Dante’s big adventure we were notified by the client that Dante had passed the quarantine requirements and was ready to be brought to her new home.

Our team was ecstatic to hear about the reunion between Dante and her human and very grateful to have been a part of making it happen! In a recent update, the client let us know that “Dante has made an excellent debut in the Southern Hemisphere!” and had this to say about her experience with our team during this important journey:

“I hope you know how much it means to me to have this help while I can’t be there with Dante. It’s been really hard to try to get help with her, and it’s such a relief to know that if I ask for help from y’all it actually gets done, properly and on time. I know that Dante is getting loved and looked after when she sees you, and that is such a relief. I wish I’d found you guys sooner, so much love and gratitude to everyone who is being a part of getting my little girl Dante through this time and ready to come to Australia, you are the best.” – XX Sarah M.