Lindsey To The Rescue 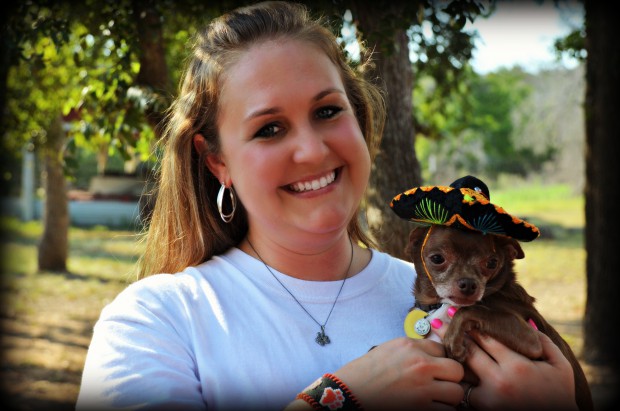 Lindsey Ortiz, a long time Pet Gal and avid animal lover received a phone call one day from a Social worker that one of the patients at the facility needed help with their elderly cat and dog and that the lady was in a rehab home and not sure when she would be released.

Lindsey spoke to the lady directly and told her that she would be happy to visit her home to check on the animals and then they would need to come up with a plan to care for the animals till she got out since she wasn’t close to Lindsey’s home.

Lindsey went by the rehab facility, met the woman for the first time who trusted her to go to her home to check on her babies. She could tell the lady was not in good shape and was anxiously waiting to see what the home would look like. Come to find out the ladies elderly mother was also in the hospital, so she could only imagine what she would find in the home.

The lady apologized for any mess, and stated someone next door was going by to make sure the pets had at least food and water, but otherwise didn’t care enough to pick up after the animals. The lady had ran out of all help from her support system including neighbors, church and any friends she may have had and was desperate.

One day later, Lindsey headed over to the home, opening the door she was immediately hit with the smell of urine and feces. She walked in to find what was one of the most unsanitary sites. There were potty pads all laid out just covered in what must have been weeks of animal feces, and these poor babies were living in it. She immediately picked up everything, changed the unsightly kitty litter box and started cleaning.

As for the animals, once the fresh wet cat and dog food, water and kibble were out, the cat slowly came out from under the bed when Lindsey was out of sight to start eating. Lindsey quietly came around the corner to see what the cat looked like and was sad to see she had half her fur missing, her eyes were a mess and she was very thin. In the corner was a cowered Chihuahua who didn’t make a peep. Lindsey slowly got close enough to the dog and reached out for her to smell her. She didn’t snap or growl and Lindsey went to pick her up after some time. The dog was terrified, filthy, and her skin was in bad shape.

Four hours later, Lindsey felt she barely made a dent, but at least it was better than what she found it in. The babies were fed, and she could start coming up with a plan on what to do going forward. Lindsey realized after coming home that her legs were completely bitten up by fleas and this was going to be a huge task.

The next day Lindsey called and spoke to the lady to ask permission if she could have some close friends come over to help clean the place up. The lady granted permission with much gratitude and Lindsey started calling and reaching out to her animal loving friends for help. A fellow Pet Gal, a vet tech where the pets go, an animal control officer, and a couple fellow rescue friends agreed to come help Lindsey that weekend to do what they could to clean it up.

That following weekend, the massive clean-up began bright and early. Lindsey and the vet tech planned to take the babies to the vet while they cleaned the house and then bug bombed for 24 hrs. The hard part was that everyone had to work in the filth with fleas before it got bombed. Lindsey’s body was covered in over 90 bites on her torso, arms, and legs. Clothes and spray could not keep them off her.

Throughout the day people came and went and joined Lindsey in the cleaning efforts. By the end of the evening with a few people left standing, they were able to set their brooms, gloves, and masks down and have a big sigh of relief that now these animals and the lady and her mom could live in a much better environment. They could only hope it could stay that way. The animals were given a bath, treated for fleas and came home to clean bedding, better food donated by The Pet Gal, preventative pills donated by a vet and much less dust and no fleas!

Through that weekend, a new neighbor offered to step up to help check in on the cat and dog daily and refresh the potty pads, food, and kitty litter box and even throw in a couple loads of laundry. Lindsey prayed hard on this and thankfully everything came together. She continued to follow up with the owner and excitingly got a phone call several weeks later that the lady was being released to return to her clean home and babies. The lady was so very grateful that a group of strangers took care of her babies and her home while she could not.

A week or two later Lindsey had not heard from the lady and called the home only to receive a voice message. She never heard back from the lady and just hoped for the best. A month or two later, she ran into an individual that informed her that both the lady and her mother had passed. Lindsey did some research to make sure the babies were in the care of someone and was told an aunt and other relative came to get the animals, and that was the last she heard.

This is another testament of the true animal lovers our Pet Gals are at heart and their commitment to insuring the well being of all animals.

Posted by Pet Gal Susan with - in Cat Rescue, Dog-Rescue