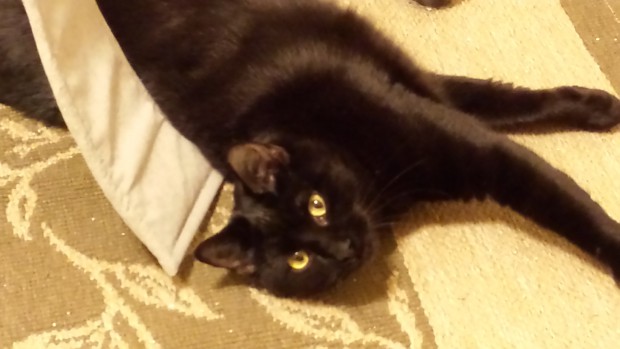 While living in Florida for several years, I became active with a group of people dedicated to helping feral cats living along St. Joe’s Walkway in Palm Coast.  We not only fed the large population of feral cats, but we also managed to initiate a TNR (trap, neuter, release) program.  I also fostered some of the younger kittens and tamed them so they could be adopted.  Eventually the local Humane Society purchased property especially for the county’s feral cat population, and all of the St. Joe’s cats ended up with a safe place to spend their lives.

Little did I know that when I returned to my home in Cedar Park, another feral colony was living right in my own back yard!  While I was living in Florida, I rented my house out to tenants who told me about the cats.  They pointed out the colony’s matron and said every year there were new kittens, and every year they eventually disappeared.  I vowed not to let that happen again and embarked on an effort to trap all of the ferals in my own colony for TNR.

By the time I researched options and gathered traps, only two cats remained—mom and dad!  I was successful trapping the mom, whom I named Athena, and took her to the Williamson County Animal Shelter in Georgetown where they spayed her and gave her a rabies vaccination at no charge.  (I also opted to have her microchipped for a small fee.)  My instructions were to try to keep her indoors in a crate until the following morning.  However, having observed her acrobatics in my back yard for a few months, I decided to keep her indoors to heal from her surgery for several days.  I created a comfy place for her in a large wire dog crate, and she seemed quite happy.  (I had also opted to purchase pain medication for her, so that probably added to her quiet disposition!)

During Athena’s recuperation, I set out to trap the male.  But a surprise visit to the cat food dish by two tiny kittens quickly changed my plans.  The two kittens were easily trapped right before I released their mother, who was becoming restless by then! Naturally, the two kittens were extremely frightened.  They hissed and threatened me with their upraised little paws. They certainly captured my heart, and there was no way I was going to release them and have them “disappear” like their siblings from previous litters. Soon I discovered that their hisses were all for show—they were actually very sweet, and before long I could pet them and eventually pick them up and cuddle them.  I let them make those decisions and never forced myself on them.  They were kept in one room (my office), and they gradually would get close to me while I worked on the computer.  Charlotte and Idabelle have since been spayed, vaccinated, and microchipped, and they have become super-sweet and affectionate members of my fur family.  They will celebrate their one year birthday around the end of April.

While the play Cats! entertains us with the antics of Broadway felines, homeless cats have a rough existence.  They are prey to owls and hawks, and often get involved in brawls with other cats.  They reproduce very quickly!  According to literature I read about TNR, spaying one female prevents the future birth of 5000 kittens!  TNR is a humane way to stop the cycle, and several animal shelters offer free spaying/neutering and rabies vaccines for trapped ferals.  During surgery, the cat’s ear will be notched, indicating that this cat has already been spayed or neutered.

Trapping feral cats is actually quite simple.  Food should be withheld the day before trapping so the cats are hungry.  Place newspaper or cardboard at the bottom of the trap and use canned food or tuna as bait, pushing it to the far end of the trap.  Traps should also be tested before use to make sure they function smoothly. Plan to set traps out early in the morning of the day surgery has been scheduled.  (I saw the male in my yard one evening so I set out the trap.  Soon the trap was sprung, but I caught a raccoon, not a cat!) It’s a good idea to place the trap somewhere that can be easily seen from a distance.  I placed mine so I could watch it from my kitchen window and immediately go cover it with a towel to reduce the trapped cat’s stress.  I took a roomy pet carrier to the shelter so Athena could be placed in it after surgery, since I knew I was going to let her recover in my house for several days and the trap is rather confining and uncomfortable.

It seems females and young cats are easier to trap than mature males.  I was told this is because the females have a strong instinct to feed their young, and the young are growing and hungry, thus they are more willing to take a chance on free food than the wily males.

Taming a mature feral cat to be a calm indoor pet is difficult.  However, younger cats can be tamed–with lots of patience.  Opt to keep them in a small area at first so the space does not seem so overwhelming to them—and so they can’t escape and hide under furniture. I kept Charlotte and Idabelle in a large dog crate in the beginning and let them out several times a day—always at feeding times.  They soon associated me with food, and before very long at all I was petting them while they ate.  I soon introduced them to toys and had many laughs watching them with their “prey”! Before long they were climbing into my lap.

I still see Athena nearly every day.  She eats the food and drinks the water I leave out for her, yet I will still often see her sitting under the bird feeders!  Often she will relax on the limb of a tree near her food dishes.  I can go right up to her and we have a conversation.  I always tell her that her “kids” are doing well, but I think she already knows that!

Posted by Debbie MacCarroll with - in Cat Rescue